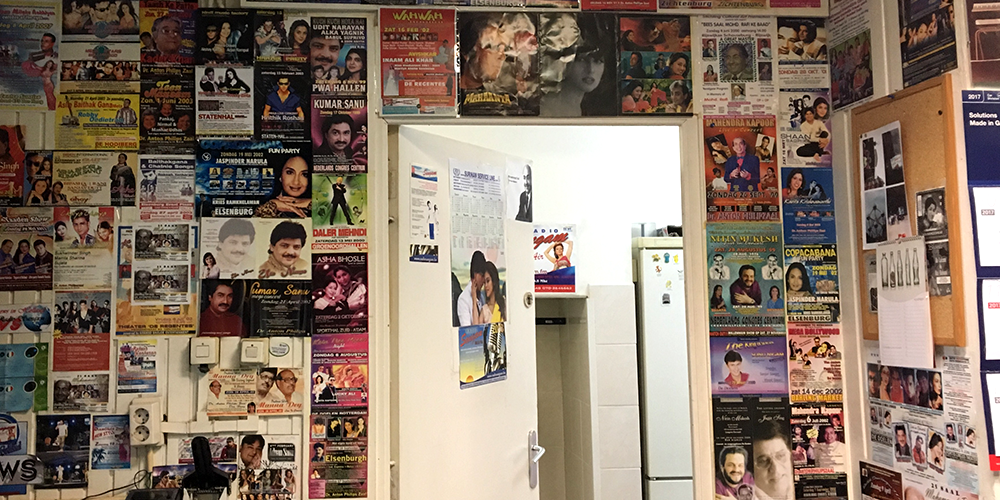 03 Nov A Slice of Bombay in the Netherlands

I have spent the past one year in The Netherlands trying to become aware of my surroundings, learning from them and binding them with my current research. The kind of conversations and experiences I have had with the different yet familiar sights and sounds, has made me aware of a body of knowledge that eluded my attention all this while.

When I first came to The Netherlands, I must admit I knew very little about the Dutch colonial history, the indenture system, how India was also a part of it at one point (and continues to be!) It was intriguing to find myself occasionally listening to Bollywood songs being played at ethnic stores or community parties –or that Divali (not Diwali, as I was used to spelling it) was being celebrated in The Netherlands with a lot of pomp and joy. These were not just a subject of my initial naive fascination, but digging deeper into it exposed me to a world full of possibilities, and I saw immense potential for research. I sincerely wanted to know, to enquire, and to assimilate the Dutch-Hindustani community that I had identified and identified with. So much so, that I drew it into my first case study.

My current research on Bollywood tourism taps into how people from the Indo-Caribbean Hindustani diaspora identify with and experience places from the comfort of their homes, relying on their imaginative prowess-In other words the act of arm-chair travel. Studying the Dutch Hindustani diaspora (as they are alternatively called) is of particular interest to me for two reasons: One, because of their unique formation underpinning a complex post-colonial context that sets them in three starkly different cultural contexts at the same time viz. Indian, Caribbean, and the Dutch and two, because the identity of the people from this group stems from these aforementioned contexts, which further accentuates the question of how and in what ways they maintain strong ties with their Indian roots, 3 countries and 3 generations later.

My field work involved visiting various cities in the Netherlands, talking to the people of the Hindustani community, about how they were introduced to India and to what extent Bollywood films inspired them to travel to their ‘distant homeland’. The more I engaged in these conversations, the more I identified with them, with their yearning for their roots, and its reflections on their current ways of life.

As a part of my fieldwork I recently went to interview a radio presenter at a popular Hindustani radio station at Den Haag. It was one of the oldest radio stations which continue to play popular Hindi music (aka Bollywood music) and engaging the diasporic audiences in familiar languages of Urdu and Hindi. For years they have been preserving popular culture from India, which was evident from what I saw in that space. Bollywood- call it a product or an industry resonates with the diaspora, as it gives them “something to hang on to” and I saw lot of those notions come alive during my visit.

I reached there on time, and waited for my respondent who was engaged in his show. While I waited, I grasped what was going on in that little two studio space of the radio station. On the outset, it was a very simple space, but bursting with so much color and so much Bollywood, that my brain couldn’t fathom. I knew that Bollywood was a “thing” of popular consumption, but to see them ‘preserve’ it was a pleasant surprise. It wasn’t state-of-the-art as most radio stations I have seen, but it was a kind of space which was lovingly maintained by a relentless team. I saw lot of interested and passionate people work in the studio who put a lot of time and effort into running this Radio channel. I saw pictures of my favorite singers from Mohammed Rafi, to Mukesh, and Lata Mangeshkar from the ‘Golden Era’ of the 1950’s and 1960’s to the 1990’s where the walls adorned posters of Kumar Sanu, Udit Narayan and their contemporaries. It felt like a slice of Bombay in the Netherlands to me, where there was so much concentration of elements I identified, or rather had grown up with. It took me back to my daily post-dinner ritual I shared with my father of listening to songs from the black and white era, and humming along with them.

My respondent arrived and I snapped out of my train of thought. He very kindly took me around the entire studio to give me a glimpse of what they have been doing for years together and also asserted how Bollywood is really central to their community. He also spoke interesting things about how they do programming, the slot scheduling, and also the reach of the radio station. As I walked around the studio, I grasped even more the passion that seethed through the walls of the tiny studio. What I knew in theory was so much for real, I thought. I saw a room full of records and CD’s even from before I was born- a real treasure trove.

I finished my fruitful interview for my project with the radio presenter and to my surprise he invited me to be interviewed live on the radio! While on one hand it was thrilling, I also saw it as a suited venue to explain to a larger audience what I was really doing with my project since it would reach a dedicated audience base of the Hindustani diaspora in the Netherlands. The questions in this spontaneous interview mostly dealt with my background, my project, and my experiences in The Netherlands and was conducted in a mix of Hindi and English. They were quite elated to hear about my affiliation with the innovative ERC project- Worlds Of Imagination and wished me success for my future quest.

Someone had once asked me what drove me so interested in this research, and I remember retorting almost immediately, “I enjoy researching the diaspora, because they’re me, and I am them.“