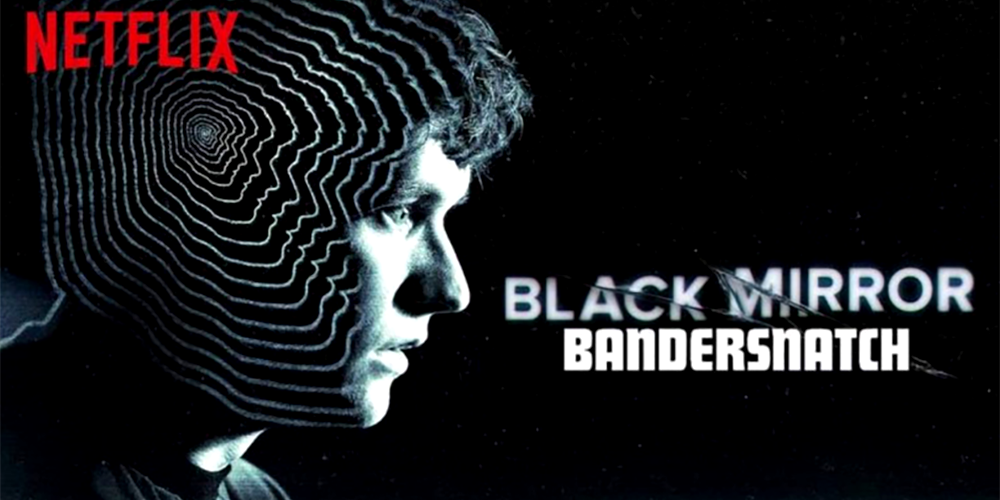 During the Christmas break many of my days were spent binge-watching shows and films on Netflix. So much for all the promises of productivity and finishing up articles I made to myself (although, in my defense, I am after all a media scholar). I watched Bandersnatch, a film special within the television series Black Mirror, a science fiction series about the role of technologies within modern society, which is created by producer, screenwriter and author Charlie Brooker.

Bandersnatch follows the young game developer Stefan in the 1980s. Not the first interactive film or game ever made, but a novel (and somewhat hyped) production nonetheless, Bandersnatch is a choose-your-own-adventure-style film, reminiscent of old gamebooks and 1980s arcade games, in which viewers are presented with choices with determine what protagonists in the narrative do. As such, viewers jump to different chapters and pathways, creating different storylines and conclusions. As I went along, at first making seemingly arbitrary choices such as what breakfast cereal to pick for Stefan, the choices became more difficult, tricky and eventually even gruesome. Suddenly I found myself in an exhaustive loop, trying again and again to avoid Stefan’s grim demise, which seemed to be the inescapable central element of the interactive film.

Between the entertaining interactive elements Bandersnatch has to offer, as well as the bumping 1980s music and nostalgic game consoles, the episode brings forward some very interesting meta-musings on a concept that is of interest to me as a scholar, namely human agency. In the social sciences, the traditional agency vs. structure debate circles around the idea that people have free will, free choice and the ability of acting independently, whilst navigating in society, which contain their own sets of rules, norms and guidelines and limit the choices people can make. As illustrated by Bandersnatch, the agency vs. structure debate is one that is inherently about power.

One way in which this power is enforced, is through what scholars like Foucault and Deleuze have theorized as discourse; a multi-faceted concept referring to “a way of thinking and talking about a particular topic at a particular moment [and in a particular place] in history, that exists and operates in language and texts. A discourse determines and limits what can be said (and known) about that particular topic and in doing so reflects and serves particular interests in society” (definition provided by Emiel Martens). Underlying meanings and knowledges that are inherent in discourses are often “taken-for-granted”, and with that, very powerful as they are deemed ‘natural’ and ‘logical’. As media studies have brought forward, popular media can be seen as one important institute in governing people’s agency. Namely, popular media are a widespread, proliferating, and widely consumed form of entertainment, and form a large part of people’s everyday lives. Popular media entail many (often contrasting) ideologies. Thus, considering their pervasiveness, popular media are important in disseminating particular ideologies which can have consequences in the experience of real, everyday life.

This is a topic that surfaces in my own research as well, in which I look at the interrelations between fiction (film and television) and local and national heritage in the UK. For example, in my research on film tours in Edinburgh, I found how popular cinematic fiction becomes increasingly intertwined with non-mediated, historical narratives in myriad ways. Consequently, this collision of fictional and “factual” narratives shapes particular socio-cultural imaginings of Edinburgh, and Scotland in general; one in which cinematic heritage continues to be subjected to the grand narrative of national history, and another in which Scotland and Edinburgh are constructed as inherently cinematic. As mainly canonical, grand narratives form the crux of the storytelling during the tours, other kinds of histories, such as migrant histories, are overshadowed. A tourist could thus walk away from such a tour with a quite one-sided idea of Edinburgh’s history.

Moreover, fiction seems to be used by tour operators in a distinct way; it is deployed to elucidate, deepen out and dramatize real-life, historical events, thereby tapping into tourists’ imaginations, emotions and feelings. With that, tour operators seem to recognize fiction as a very persuasive “tool” for providing storytelling on the city of Edinburgh. It is the role of fiction in shaping heritage that I’m delving deeper into in my current research on cinematic museums. More so than walking tours, museums are considered as highly authoritative institutions that are pivotal in informing domestic and overseas visitors about local and national culture and identity. What does the world of popular media, and in a broader sense, fiction, mean in these traditional, institutionalized, authoritative settings? And what does it tell us about the presumed reality and national identity of England’s citizens? In other words, how do fiction and presumed reality collide in a highly authoritative setting as museums, which are considered as essential institutions in consecrating national and local heritage?

Ultimately, the fiction of Bandersnatch provides us with the illusion of choice; as you go along the episode, making choices, you will find out that there are, in fact, many limitations. For example, it turns out you, as a viewer, can make a “wrong” decision, which forces the viewer to go back and make another choice, which prolongs the story and which is probably intended by the producers. If we follow Bandersnatch‘ pessimistic and sociological undertone, it remains continuously debatable how much choice and free will we, as people navigating through society, actually have, and how aware we actually are of these settings. After I started to feel increasingly bad for picking the worst options for Stefan, as if I as a viewer symbolized the societal structure in which he futilely navigated his actions, I had to remind myself that it is a fictional story anyway. But despite of all the sci-fi, futuristic and fantastical elements, the grim, entirely fictional Black Mirror “discourse” holds some interesting thoughts which are relevant to everyday, real life, and which are persuasive enough to make me consider that one day, it might even become reality.