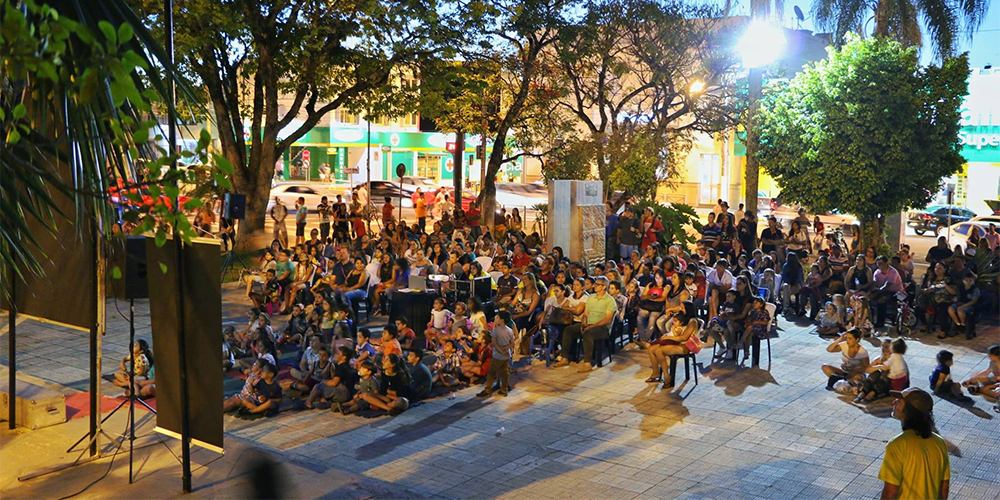 30 Apr Cinema on the Road

Much has been written about how digital technologies made it easier for media productions to travel the world – think of cable TV, live streaming, TV-on-demand, etc. Inside our social (media) bubbles, we are used to a constant flow of images on our (phone, tablet, TV, laptop) screens. These images, however, do not reach everyone equally. The Global Digital 2019 reports for example show that while in Northern Europe internet penetration reaches the mark of 95%, in Middle Africa only 12% of the population is connected.

In the country where I conduct research, Brazil, internet distribution is not only still highly uneven, but also analogical forms of media consumption are not accessible to the entire population. In some regions, for instance, people have never visited a movie theater, either because of a lack of financial resources or for simply living in a remote area. That’s where the project Cinesolar comes in. Cinesolar is an itinerant cinema that travels to villages and small towns to exhibit movies and carry out artistic workshops – all for free and moved by solar energy. Being the first travelling cinema in Brazil to ever use renewable energy, Cinesolar promotes art, inclusion and environmental awareness in areas of the country with little access to cultural projects. Besides films, some of the activities the project offers are workshops of graffiti (using natural pigments extracted from coffee and beetroot, for example), organic music (where participants build their own musical instruments out of recycled material) and cinema production (where locals acquire basic knowledge in acting, script-writing and filming techniques, and make a short movie to be exhibited during the main cinema session). Travelling around since 2013 in two vans equipped with solar panels, Cinesolar has so far realized 932 screenings and reached over 150,000 spectators.

As a researcher studying the effects of media in sensitive areas of Brazil, I cannot deny my happiness (and academic interest) when I see initiatives like Cinesolar. In the project Worlds of Imagination we are always casually debating how people travel to film locations here and there, sometimes forgetting that some do not have access to the films in the first place. In this sense, Cinesolar proposes a shift: if people cannot travel to the movies (let alone movie locations), make the movies travel to the people. Considering the inequalities in Brazil, this shift is much welcome – although obviously not a final solution (there is a lot still to be improved in the country in terms of infrastructure for cultural activities, the complexity of which I would not dare explain in one blog post).

In my research I also talk about places that are featured in films, TV series and telenovelas and frequently experience short-lived benefits from the media exposure they receive. Film crews come and go – and seldom leave any legacy for these less privileged areas. What I often observe in my fieldtrips is that locals wish that filming practices were more recurrent and chiefly conducted by themselves. For them, it would be a way to potentially generate a more long-lasting imprint in their communities. Projects to train local communities in filmmaking exist, but due to several shortcomings – lack of resources, for example – they do not take off as expected. Hence, Cinesolar resonates with my research on yet another level. By teaching locals a bit of the profession in its workshops, the project encourages them to become not only cinema consumers, but also cinema producers. Of course, I am not trying to say here that in a couple of days Cinesolar changes people’s lives, or to defend the naïve rhetoric which deems culture (cinema included) as a cure to all problems that such locations face. However, I see in Cinesolar a positive attempt at bridging the gap between these Brazilian villages and the once called ‘global village’. If only for the time Cinesolar is in town, these places connect to widespread media consumption practices and their inhabitants become ‘prosumers’ themselves. Again, definitely not a final solution, but in remote places of Brazil initiatives like that end up somehow remediating the lack of governmental action.

As said in the beginning, media productions travel – through optical fibers and satellites. Cinesolar, however, proposes a more analogical route, bringing cinema and inclusion in the back of a van.