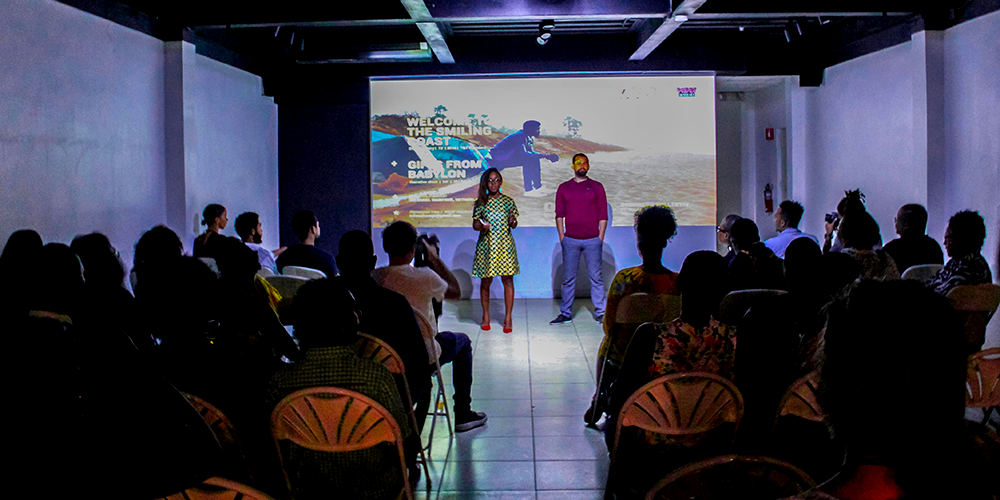 26 Oct On Being a Committed Postcolonial Media Researcher

Last month I attended the 13th Trinidad & Tobago Film Festival in Port of Spain, the capital city of Trinidad and Tobago on the northwest coast of the Caribbean island of Trinidad. I participated in this annual celebration of films from and about the Caribbean and is diaspora in two capacities: as academic researcher and industry partner (the latter as film producer and programmer, mainly through my foundation Caribbean Creativity). My dual lens, zooming both out and in, is part of my attempt to bridge the gap between the world of academia and the world of practice.

As a postdoc researcher at the Erasmus School of History, Culture and Communication, I position myself in the field of Media Studies and Postcolonial Media Studies in particular. Traditionally, most work within this field has focused on textual analysis, i.e. the interpretation of the meanings of mass media texts such as feature films, television programs and video games. Although both production research and audience research have over the years become important strands within Media Studies, scholars still too often look at media texts in isolation, without taking into account (or even having knowledge about) their producers and consumers, the people who actually create and negotiate the meanings of the media (and the world in general).

We almost cannot escape the image of the fusty academic ensconced in his ivory tower, explaining the world while at the same time avoiding that very same world. Of course, the ‘ivory tower effect’ is far from unique to Media Studies, but cuts across all academic disciplines. For example, my brother, who is a corporate lawyer, sometimes by pure chance stumbles upon a journal article by a law scholar discussing a case that he has handled. Never has such a scholar approached him for his side of the story and never has it, according to my brother, resulted in a spot-on article. On the rare occasions that the fusty academic does descend from his ivory tower to interact with the world around him, it is usually to visit libraries, to attend conferences, to consult peers, to meet publishers, to convince reviewers, or to teach students (although the fusty academic usually does not like to teach either). Still, on all these occasions, he remains safely within the comforts of the academic world.

However, any academic who would like to think of himself as a committed intellectual (despite the fact that the term ‘intellectual’ is in itself already quite highbrow), should try to reach out to the general public, to communicate on an understandable level, to work together with producers and consumers, and to participate and make a difference in the real world. According to prominent postcolonial thinker Homi K. Bhabha, a ‘committed intellectual’ (it is his term) abolishes the division between theory and politics and uses the act of writing to take a position dedicated to effect social change. I would like to suggest that the act of writing does here not only refer to academic writing but also, and maybe even more so, to popular writing, since this type of writing usually reaches larger audiences and encourages greater social action. While many academics still look down on popular writing, mainly because it is seen as less complete and nuanced, I consider doing a blog like this one, or any other form of public communication (preferably a collaborative form, such as the films I am involved in and also screened in Port of Spain), as of vital importance for the contemporary committed intellectual.

I might even want to take it one step further and argue for the academic as a committed entrepreneur, an academic who not only engages with the stakeholders in the practical world but is a stakeholder in that world himself. Business consultant Isaiah Hankel asserts that ‘the modern professor is not just [or should not just be] an academic intellectual but also an entrepreneur.’According to Hankel, the academic may be “an entrepreneur who spends the morning wearing a pair of Google Glasses (…) [after which] he’ll submit (…) a draft of his next New York Times bestseller to his editors. He’ll attend a regional industry conference next month on the way to giving a TED Talk and appearing on the Oprah Winfrey Network.”

Although I do not aspire to wear Google Glasses, write a New York Times bestseller, do a TED Talk or appear on Oprah’s network, I consider my journey as an academic entrepreneur as a productive path to close the gaps between the academic and the practical. It is my attempt to contribute to awareness and change in the real world, a world that continues to be shaped by colonial legacies and postcolonial predicaments. There are “many rivers to cross”, as Jimmy Cliff already sang in the first Jamaican feature film, The Harder They Come (1972), but a commitment to building bridges remains the way to go.