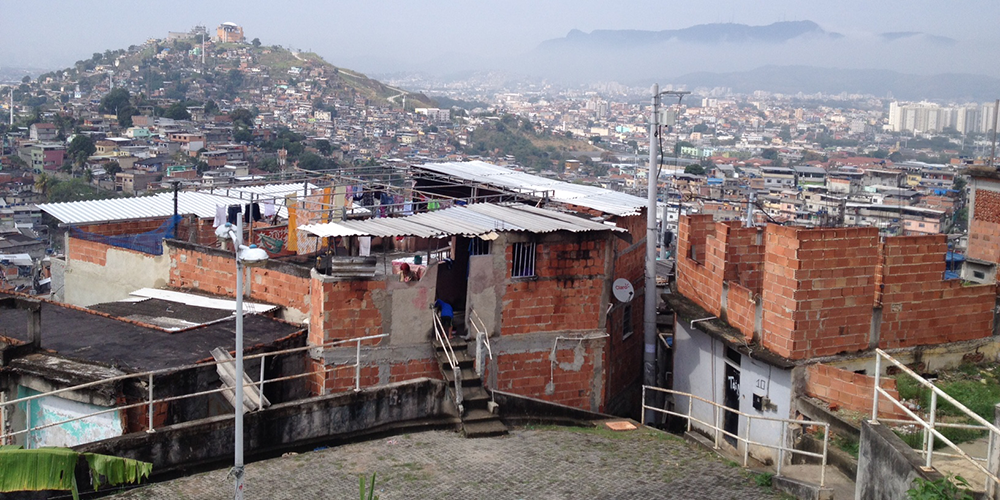 01 Sep Research in the favelas: by whom and for whom?

After spending five weeks in Brazil for my fieldwork, here I am back in the Netherlands with lots of stories to tell and fond memories to recall. And, I must admit, I got back with more questions than answers regarding my research project – which is actually great.

For my first case study I am researching the favelas Paraisópolis in São Paulo and Complexo do Alemão in Rio de Janeiro. Both have served as locations of famous Brazilian telenovelas – I Love Paraisópolis (Globo, 2015) and Salve Jorge (Globo, 2012) respectively – and experienced a certain tourism boom by the time these productions were airing. Nowadays, due to several circumstances, including insecurity, the influx of tourists to these places has been significantly reduced. With this case study, I intend to debate pressing issues about film tourism in Brazilian slums, such as the impact of tourism on the residents’ lives and the possibly ephemeral effect of media productions on tourism. During my fieldwork period, I have talked to local artists, community leaders, tour guides and entrepreneurs from the favelas – people who helped me understand the nuances and paradoxes of favela tourism. Most importantly, they showed me a glimpse of what life in a favela actually is – and how different it is from my own experience.

I was born and raised in Rio, but I have never lived in a favela. Nowadays, living in an European country, I’m even more detached from this reality. Of course, I’m not clueless about it: I’ve extensively studied the favelas, visited some of them in the past, and talked to many residents before. But for some reason – maybe the amount of time spent there this time, or the stories I heard, or even the current media coverage on slums – I became even more aware of my own alterity in the context that I’m studying. Alterity that became even clearer when one of my interviewees showed me the holes in the walls of his house in Complexo do Alemão, made by gunshots fired by the police during a conflict with drug dealers. ‘When did it happen?’, I asked. ‘Oh, that was last Monday’, he replied.

Although my growing up in Rio has not always been free from signs of violence, these were far less frequent or brutal in my own life. I could not possibly know, at first hand, how it is to live in a place where the lack of security and the existence of conflicting powers somehow dictate the routine of its dwellers. Therefore, coming from this outsider position, I understand the need to be very thoughtful and reflexive when analyzing my participants’ experiences and translating them into the works that I write and publish. I figured that more dialogue between the researcher and the researched is necessary to genuinely grasp the reality that I’m studying. Seeing my participants as collaborators rather than mere subjects is fundamental to conduct research in a more responsible and respectful way. Instead of researching about favela residents, I need to research with them. But how can I create this dialogue? How can I make my research accessible to the communities I am working on?

After struggling with these questions throughout most part of my fieldwork, I finally found some answers during a visit to the institute Raízes em Movimento in Complexo do Alemão. Founded in 2001, Raízes has consistently worked towards the human, social and cultural development of the community by promoting workshops, debates and cultural projects. One of them is the seminar “Vamos Desenrolar” [Let’s Explain], a bimonthly encounter between researchers that study the territory and members of the favela. In an agora-like assembly, researchers present the preliminary or final findings of their studies, and open the floor to questions and comments from the residents. According to the founder of Raízes, Alan Brum, this is a fruitful way of connecting these two worlds and promoting a more inclusive relationship between researchers and favela inhabitants. It’s an opportunity for locals to understand what is being discovered about the community, but also for academics to listen to the community’s perspective on their topics.

“Vamos Desenrolar” is one of the possible answers to my concerns – among many others I might still find out. By bringing society and academia a bit closer, it challenges the usual power dynamics in the production of academic knowledge and gives the researched subjects a bit more agency in the construction of such knowledge. Hopefully I’ll have the chance to participate in one of these meetings when I’m back in Brazil, and maybe even help to promote similar events not only in Alemão, but also in other fields that I might investigate in the future. Throughout my research I will constantly keep thinking of ways of making the connection between academia and society, and tackle my own alterity when studying places I do not belong to.